In January 1994, the Instituto Antártico Argentino (IAA) and the Alfred Wegener Institute for Polar and Marine Research (AWI) jointly opened the Dallmann Laboratory as an annex to the Argentinean Jubany Station at Potter Cove on King-George Island. Their mission was to promote bilateral collaboration in Antarctic ecosystem research. Argentine and German scientists conducted cooperative projects investigating the Antarctic shallow water ecosystems and the terrestrial communities on Potter Peninsula. When The Netherlands Organisation for Scientific Research (NWO) joined the collaboration in 2005, Dallmann Laboratory became the first trilateral research facility in Antarctica. The laboratory is named after Eduard Dallmann, a German polar explorer. Jubany Station was renamed into Scientific Base Dr. Alejandro Carlini on March 5th 2012.

Dallmann Laboratory offers living and working space for 14 scientists working in 6 laboratories, a workshops, and a thermostated aquarium container. Most marine projects require intensive diving support, provided by divers from the Argentine DNA (Direccion Nacional del Antaritco) and AWI diving teams. The teams operate from the Carlini Station diving house which is equipped with compressor, decompression chamber, and lockers for diving equipment. Although Carlini Station is staffed throughout the year, the Dallmann Laboratory is open only during the summer months from October to April. Since some years, an overwintering scientists from Argentina is continuing sampling through the polar night. 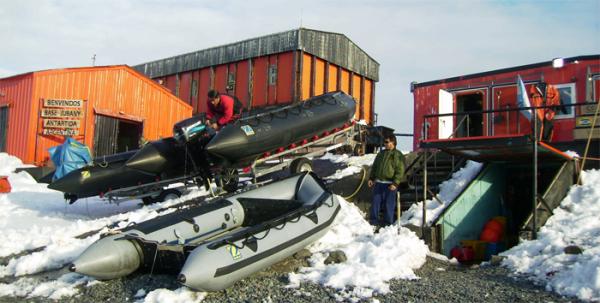 Partners from Argentina, The Netherlands and Germany are jointly involved in most of the projects. The laboratory has always welcomed international guest scientists, but in recent years and in the frames of IMCOAST, the community of researchers and students at Dallmann is becoming even more international.

The Polish Henryk Arctowski Station, situated at Admiralty Bay, KGI, has operated continuously since its founding in 1977. Operated by the Department of Antarctic Biology, Polish Academy of Sciences, this station can accommodate up to 70 people during the summer season, and 20 during the winter. Ten people are generally required to maintain the station on a daily basis. Since 1997 there has been continuous research in the fields of Oceanography, Geology, Geomorphology, Glaciology, Meteorology, Climatology, Seismology, Magnetism, and particularly Ecology. Admiralty Bay is widely considered a perfect area for such multi-disciplinary research. The station has a chemcial and biological laboratory with basic equipment. The shelters set up along the southwest shore of King George Island further enhance the area of scientific activity.